It has been an overwhelming week for us on the Shoppe Keep team. We've seen thousands of players enjoy the game and are very humbled by the response so far. We still have a lot of work to do and we hope that as the game continues to grow and evolve over time you will be happy to try out new features and mechanics.

This week has been focused on bug fixing, though there are a few new features and additions. Below are just a few of today's' highlights

Increased chance to see customers who will just browse the shoppe. These customers will not buy anything, but will just like to see what you have on display. 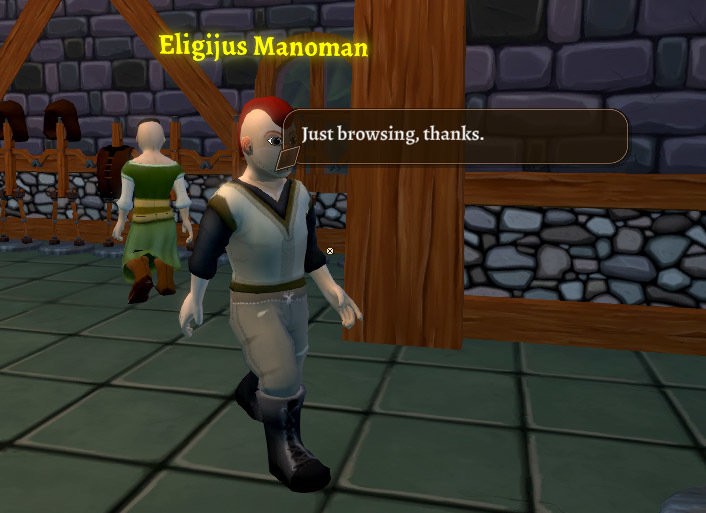 Changes to the HotbarThe hot bar has been given a small makeover to improve it with some polish and suggestions from the community. Here it is before the changes...

And here is the hot bar after today's update...

The hate system is a new feature which will allow players to see the frustration of customers in-game. Hate is generated by a customer's bad experience, whether it is walking through trash, seeing an item priced too high or other factors. Pressing the L key will bring up a list of all of the interactions your customers have had with your shoppe and what kind of response that it will have on your shoppe reputation. 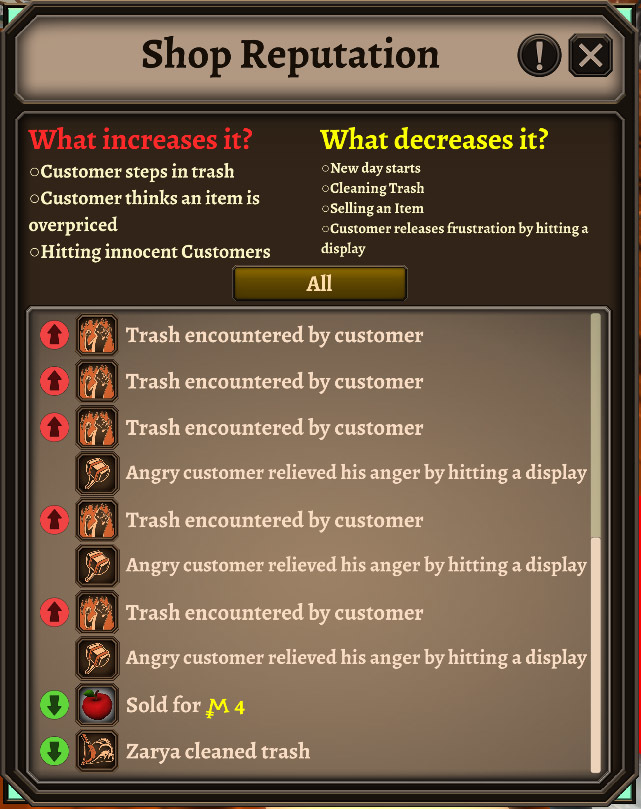 This will let you see how your customers react and what kind of prices they would have offered and are willing to pay. You will be able to make adjustments to your stock and then try to negate any negative reputation 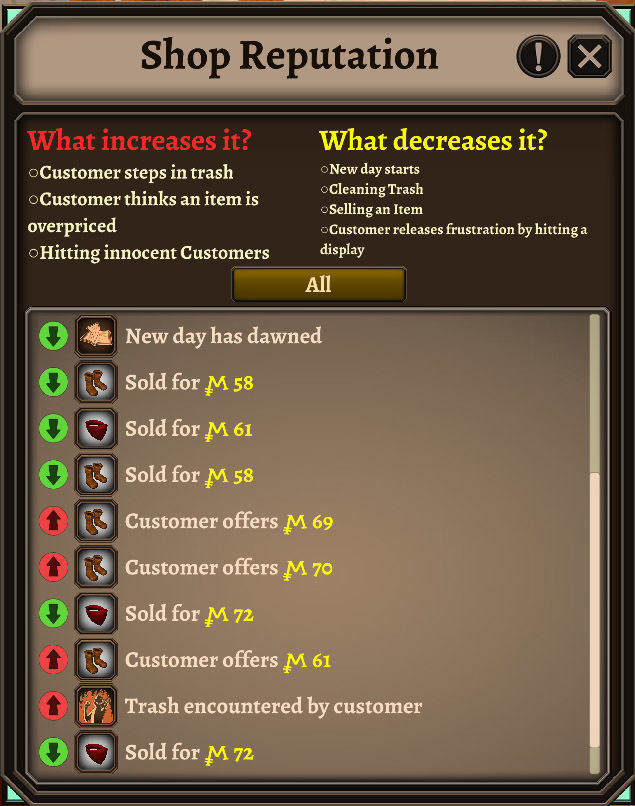 A negative experiences generates much more hate than a positive experience, so the player must be able to make up to customers three fold to negate any negative opinions. 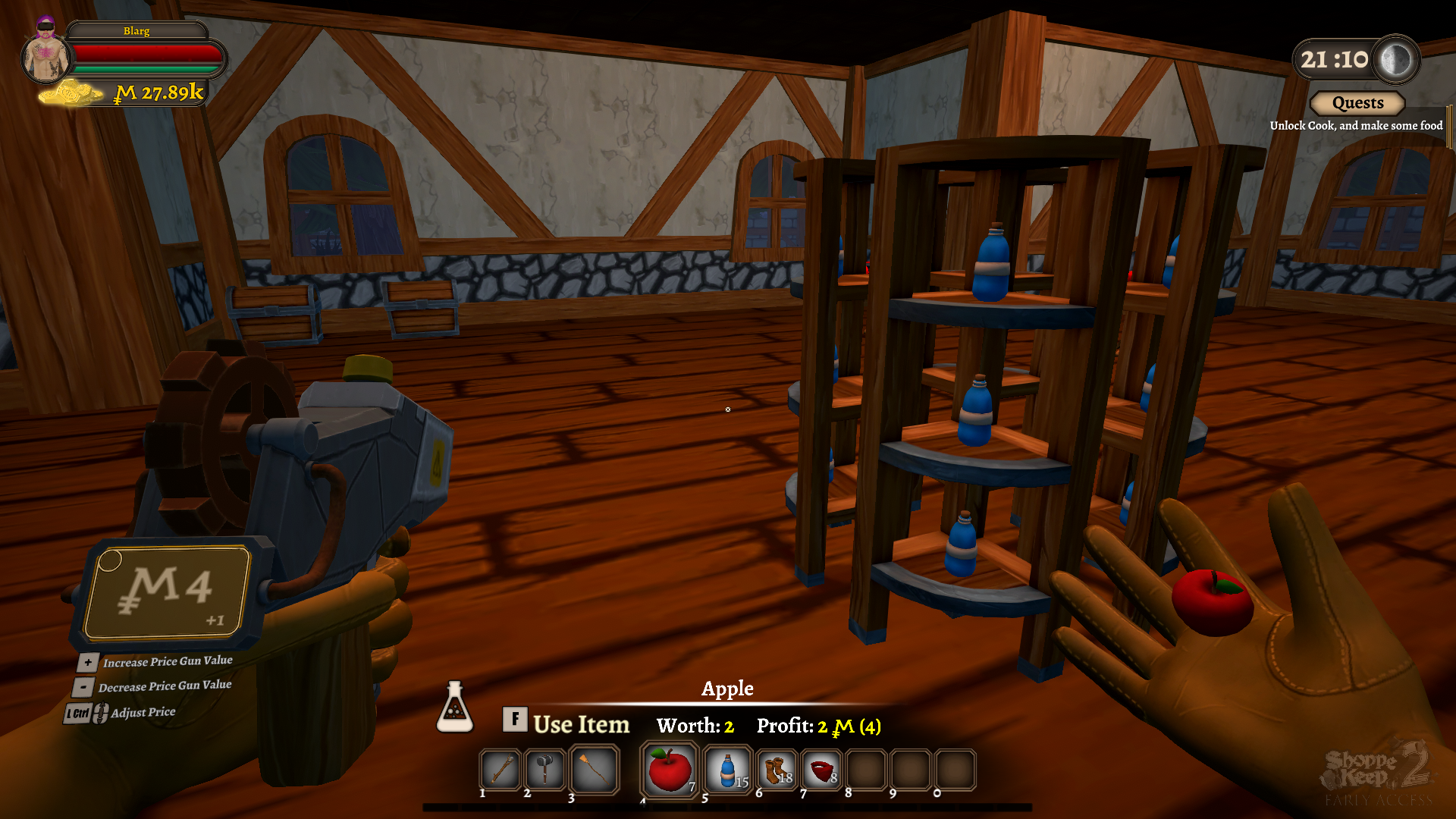 We have added a few known issues to the "known Issues thread" which hopefully this update will address, I'll be looking at tidying that thread up tomorrow. If you want to check out the current known issues (albeit this is slightly out of date due to today's build) check the link below:

And below is the most recent known issue which is still present in today's build.

A way around this is to remove an item from the container and then place it back in with the additional number you wish to add.

Of course it is important to note that none of the features in the game are complete. All features are constantly in development and there will be balance changes and adjustments to many variables during the Early Access process. We are reacting to community feedback on a daily basis and many mechanics will change based upon important information that the community shares with us. We appreciate your patience and support during the development period.

Additionally, although we are testing old save data, during the Early Access period save data may have issues. If you experience any issues, please contact us at support@excalibur-games.com with your save data info. The save data can be found in the following directory:

Below is a list of the changes, fixes and additions to todays build!